The second session of the AFAO Members Forum explored various testing options and innovative approaches which have increased HIV testing rates among communities. 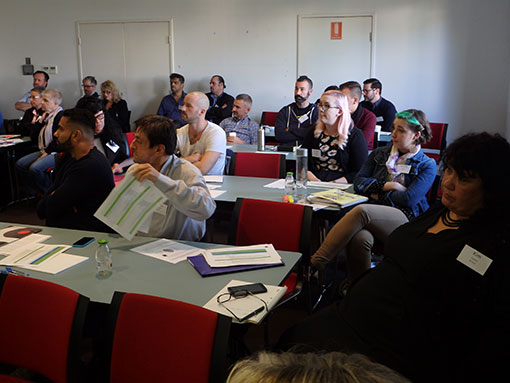 Rebecca Guy from the Kirby Institute and Philip Cunningham from the NSW State Reference Laboratory for HIV opened the session by presenting comparisons between rapid and dried blood spot testing.


Rebecca's presentation focused on HIV self-testing,highlighting the potential for rapid and home based testing to remove barriers to testing and encourage gay men to test more frequently. She said currently 30% of HIV diagnoses in Australia are late, and half of gay men in Australia are not testing at the recommended frequency.


Phillip Cunningham profiled innovative approaches to testing using dried blood spot tests delivered through the postal system. He discussed a recent HIV testing trial in the UK using this methodology, and an Australian trial taking a similar approach to administer hep C tests through the mail. He said this approach has great potential and is of particular benefit to people living in remote communities.

AFAO’s Ben Wilcock provided an update on the progress of device and medicines regulation.  He discussed the two rapid tests currently being assessed by the TGA and noted that no manufacturers have yet submitted an application for home testing.

The project focused on four community based testing sites: a[TEST] Sydney, M Clinic, Perth; Pronto, Melbourne, and Testing Point in Queensland. The research highlighted the many strengths of community based programs, saying that peer-led services are welcoming and non-judgmental environments that increase testing frequency among gay men.

WA AIDS Council CEO, Andrew Burry, discussed the impact of increased community testing on HIV notifications in WA, and highlighted the complexity of media messaging around this.


We also heard from Shaun Robinson from NZ AIDS Foundation about current strategies around HIV testing in New Zealand and the beginnings of the NZ National Action Plan.

You can download a detailed report on the forum here.