The AFAO Community and Advocacy Hub was an exciting and stimulating focal point of the national HIV (ASHM) Conference in Brisbane over 17 and 18 September. 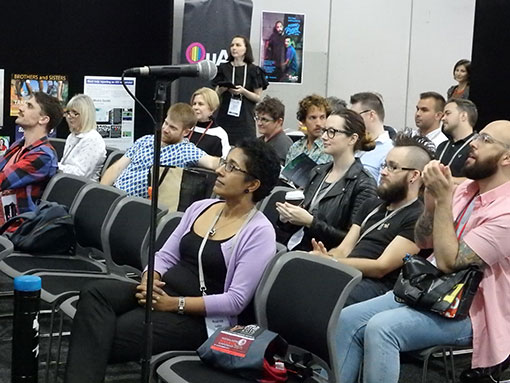 Hundreds of conference delegates enjoyed a wide range of presentations, Q & A sessions and film screenings.


The Hub kicked off on Thursday morning with a discussion of one of the key issues for HIV prevention today: PrEP. A panel of AIDS council representatives and AFAO's Executive Director, Rob Lake (pictured above) discussed priority issues for PrEP advocacy and access, including:


Max Mack from the Queensland AIDS Council (QuAC) also shared his experience with PrEP as a trans gay guy, saying that using it makes him feel comfortable and confident.

The panel provided updates on the progress of PrEP issues that are also covered in the most recent edition of AFAO's flagship publication, HIV Australia.

This special edition, Expanded horizons for HIV treatment and prevention, was launched by AFAO President Bridget Haire immediately after the panel.

Thursday lunchtime a crowd assembled for a packed session which included the launch of a new PrEP awareness campaign, updates on a trial of treatments access for people not eligible for Medicare, and a sex worker panel discussion of key policy and advocacy issues.

Speakers on the sex worker panel, pictured above, emphasised that decriminalisation remains a priority advocacy issue for sex workers. They also expressed concerns about the appropriateness and potential risks of PrEP, TasP and rapid testing for sex workers.

Calling for a 'snap to action' to improve prevention, treatment & care for sex workers, the panel referred the Hub audience to their 2014 document, Key issues: sex worker policy issues in Australia, and to the Lancet special issue on sex work.

NAPWHA CEO Aaron Cogle presented on the Australian Temporary Resident's Access Study (ATRAS), which has provided antiretroviral treatment to 180 people who were not eligible for Medicare since 2012.

Key findings at the 24 month point of the study were that:
View Aaron's presentation

QuAC's launch of ComePrepd - its new campaign about pre-exposure prophylaxis (PrEP) - was an engaging event on a topic of great community interest.

A key feature of ComePrepd is that it is a completely community created and developed awareness campaign, comprising a website (www.comeprepd.info) and a strong social media component which encourages the sharing of information among social networks.

The launch followed six months of community consultations and discussion to explore what gay, bi, and other MSM want from a campaign that openly discusses the newest tool to prevent HIV transmission.

Thursday's Hub activities concluded with a panel on HIV and mobility, including the launch of the CoPAHM report card on initiatives related to population mobility and AFAO's HIV and CALD communities: Mapping health promotion and resources.

CoPAHM is a cross-sector alliance of over 67 members working to build momentum for action in the 5 priority areas outlined in the HIV and Mobility in Australia: Road Map for Action report, which was launched in December 2014. The report card found strong momentum has occurred in several areas but there is still considerable room for improvement, particularly in the action areas related to national and international leadership.

AFAO's mapping of HIV health promotion activities with CALD communities was launched at the Hub by AFAO Policy Manager Linda Forbes. This followed a community launch the previous evening by AFAO Board member Alison Coelho, at an African community event organised by the Ethnic Communities Council of Qld.

James Gray from ACON led a lively interactive Q and A session when the Hub opened on Friday, opening up a dialogue about the importance of rapid testing.

James highlighted how national progress on implementation of rapid HIV testing has stalled following the discontinuation of trials in some parts of the country (e.g. M clinic in WA is currently not able to offer rapid tests).

However there were good news stories too. An audience member discussed the launch of a new rapid testing initiative in SA, and James also described the upcoming plans for dried blood-spot testing in NSW.

In her presentation on 21 years of the Anwernekenhe National HIV Alliance, the ANA's President Michelle Tobin outlined details of Anwernekenhe 6: Remembering, Recognising and Responding - the ANA's forthcoming National Aboriginal and Torres Strait Islander Community Conference on HIV Education, Prevention and Wellbeing. The conference will be held in Mparntwe (Alice Springs) 12 - 14 November 2015.

For 19 years the 2Spirits Program has provided health promotion activities that incorporate cultural practices into a health promotion framework to engage with Aboriginal & Torres Strait Islander gay men and sistergirls in Queensland.

Brett  Mooney and Phillip Sariago described how their cultural identity as health professionals and community members reinforces their connection with communities and is the 'key' to their connectedness and rapport with the target group - normalising conversations about sexual health, sexuality and identity.


Brett stressed that the Program is never simply 'culturally appropriate', but instead incorporates a cultural way of working in every aspect of the work.

Cultural issues were also a focus for the following session on partnerships with faith leaders. AFAO's Linda Forbes and Alison Coelho from the Centre for Culture, Ethnicity and Health in Melbourne described initiatives to engage faith leaders from migrant and refugee communities in the response to HIV.

Hub proceedings closed with the launch of the HIV Futures 8 survey. This panel session provided an update on the latest iteration of the study, which is a major survey of people living with HIV in Australia. Futures, which was first run in 1997, is an ongoing research project of the Australian Research Centre for Sex Health and Society (ARCSHS).

Jennifer Power spoke about how ARCSHS is reformatting the survey to make it more relevant to community, for example regarding tests, treatments, and PrEP. There will also be an expanded section for positive women which focuses on experiences related to conception, pregnancy, birth, sex and relationships.

Associate Professor Edwina Wright (Alfred Hospital) stressed that the survey provides invaluable knowledge in a clinical setting about the lived experience of people with HIV.

Robert Mitchell reiterated NAPWHA's ongoing to support people living with HIV to contribute to the survey.

Go to the Futures 8 survey

This is the fourth time AFAO has created a community space for the sector at a major HIV conference in Australia, providing an opportunity for AFAO members and other HIV sector partners to showcase their work and debate emerging issues.

Feedback from the punters has been very positive, so we hope to see you all again at ASHM 2016.