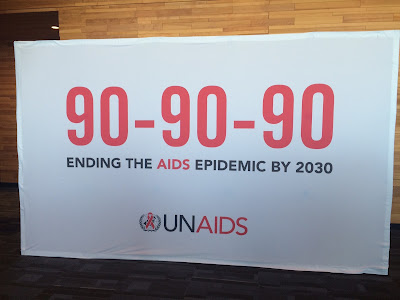 Dr Anthony Fauci of the National Institute of Health (US) provided an overview in his address, 'Progress and Challenges in HIV Prevention: Vaccine and Non-Vaccine Approaches'.

He pointed to the START study results, which show that for people who commenced ART with CD4 counts higher than 500 vs 350 or below, there was a 53% decrease in serious illness and AIDS and non-AIDS-related death.

He also highlighted some of the vaccine studies, saying that although these studies are not  showing high enough efficacy yet (for example, the phase three HIV vaccine trial RV144 only had 31% efficacy)  he said that studies such as RV144 are laying the ground for more efficacious HIV vaccines in the future.

In democratising HIV testing to reach 90-90-90, Badara Samb from UNAIDS explained that the greatest challenge to meeting the 90% target of all HIV-positive people knowing their status, is that there are almost 50% who still do not know their status - around 17.1 million people.

He pointed to evidence which shows that with every 5km that a testing facility is from the target population, there is a decrease of 15% in the number of people testing, demonstrating how essential it is, literally, to bring testing to where people are at. Likewise, he emphasised how essential it is to target key affected populations. He argued that part of the solution is to promote self-testing, while recognising the challenges in relation to efficacy.

Dr Trevor Peter, from the Clinton Foundation whose address focused on New Diagnostics to Advance HIV Testing, explained that there is large amount of evidence showing a high level of misinterpretation of community-administered rapid HIV test results.

Joseph Amon from Human Rights Watch, presented on Enhanced HIV Testing in Context of Human Rights. He highlighted that since 1996 (and updated in 2016), UNAIDS and the Office of the High Commissioner for Human Rights has produced the International Guidelines on HIV/AIDS and Human Rights, which outline the need for HIV testing to be done with consent, and that individuals have the right to high-quality HIV testing.

Issues relating to self-testing were also featured, with arguments that there is a need for much better dissemination of information about the option, while also addressing the need for linkage to care.

With the increasing array of testing options, and expanded settings including more in community, there was a palpable sense of optimism about increasing rates of HIV testing, to work towards the UNAIDS targets.