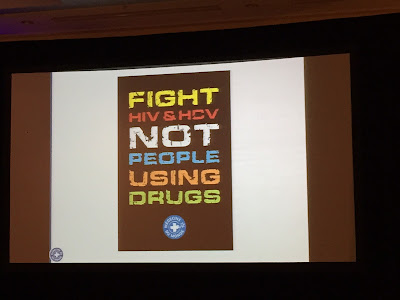 
Speakers at the meeting spoke about the global epidemic trends and disease burden of hepatitis B and C, implementation into clinical practice, hepatitis C therapeutic development and access, and the scaling up of programs and right to care across resource limited as well as middle and high income settings.

Some of the barriers raised in relation to accessing these treatments in various countries included the current cost of the drugs, criminalisation, stigma experienced in clinics, and policy restrictions. These policy restrictions related to both restricting access initially to those with more advanced disease progression, and troublingly, in some places even restricting access based on risk practices such drug use or even being on drug substitution therapy.

Australia's recent Pharmaceutical Benefits Advisory Committee (PBAC) recommendation of new DAA treatments with no restrictions based on disease progression or drug use was applauded, noting the hopeful accepting of the recommendation for December this year or April next year.

The meeting also looked at the different strategies for prevention of viral hepatitis that could work including post-exposure prophylaxis (PEP) and pre-exposure prophylaxis (PrEP) across various populations such as people who inject drugs, prisoners, HIV-positive men who have sex with men, people who acquire viral hepatitis when hospitalised, and pregnant women with the prevention of mother-to-child transmission.

I also attended a session with a focus on people who inject drugs. There was discussion about the role of drug policy in the hepatitis C epidemic, test and treat strategies for hepatitis C in people who inject drugs, and linking hepatitis C treatment to addiction care (and vice versa). Worryingly, we heard that the current Canadian government completely removed all reference to harm reduction from their anti-drug policy. One slide that I particularly liked during this meeting read: 'Fight HIV & HCV Not People Using Drugs' (pictured above).

The prohibitive costs of the new range of drugs becoming available for hepatitis C was discussed throughout the meeting, and looked at the pricing strategies that are starting to occur in other countries for lessons that could be applied in other jurisdictions.

The meeting closed by discussing public health advocacy and access to hepatitis C therapy, including implementation of hepatitis programs in resource limited settings, hepatitis B and C eradication strategies, and the role of community-based organisations in global advocacy for hepatitis therapy. It was noted that hepatitis is planned to be included in the Sustainable Development Goals 2016-2030, with goals and targets in line with elimination agendas of HIV, tuberculosis and malaria.