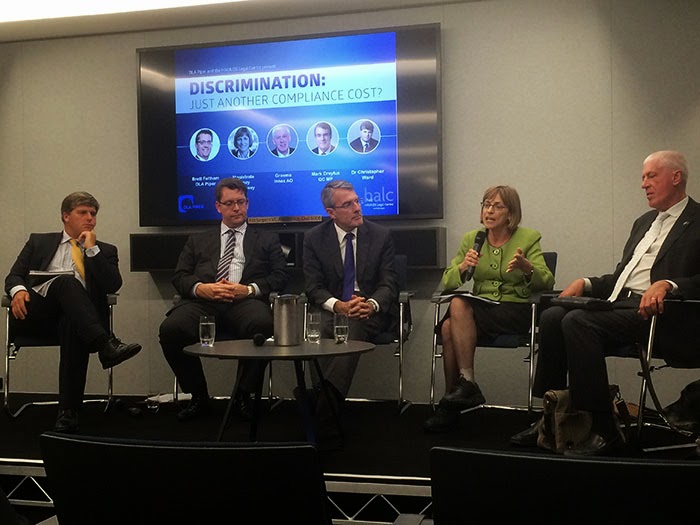 Former Disability Discrimination Commissioner Graham Innes AO dispensed some very practical advice on how to get the biggest bang from your buck for a discrimination complaint, at an excellent panel event convened on 10 March by the HIV AIDS Legal Centre (HALC).


He argued that it was a bipartisan project until the current government’s attempts to weaken the Racial Discrimination Act with the removal of s18C.

He posited that despite that attempt, Australia’s anti-discrimination framework has not taken any back-steps. Graham Innes responded that the removal of a stand-alone Disability Discrimination Commissioner was indeed a back-step – albeit not a legislative one.

New South Wales Magistrate Nancy Hennessey spoke from her experience at a state level. When the NSW anti-discrimination law was first introduced, it was a cutting edge law; it covers a range of grounds, including, homosexuality and HIV-status.

However, it has since been leap-frogged by other jurisdictions, with it, for example, failing to provide protections for bisexuality and intersex status. She also explained that a majority of individuals who are pursuing a discrimination complaint do not have legal representation, and so are at a major disadvantage in advancing their claims.

Graham Innes described the insights he gained in his complaint against RailCorp (the NSW Government agency responsible for running Sydney’s trains at the time) for discrimination against blind and visually impaired passengers by failing to announce station names.

He explained that he had sought to have his complaint settled by mediation but as that was unsuccessful, it went to a court hearing. He reflected on how traumatic it was being in the witness box, sharing your personal story and distress, even for someone like him who is extremely familiar with the process. He encouraged discrimination advocates and lawyers to be mindful of that when assisting people with complaints.

That way, he said, there was greater chance for systemic change to address discriminatory practices, rather than organisations just responding, secretly, to one individual circumstance. He also strongly recommended that all complainants seek compensation.

Australia’s discrimination framework needs to be further  developed and its institutions strengthened, as the recent Government criticism of Gillian Triggs and the Human Rights Commission demonstrates. In the meantime, we need to get out in the community and advocate for why these laws are necessary and how they help us create a healthier, more harmonious society.

Donate to HALC and support the essential work they do
Posted by Michael Frommer at 15:02