Blog Action Day is an annual day of action for bloggers around the world to post stories about an important social or environmental issue. This year the topic is human rights; an issue that is inextricably linked to HIV.

AFAO decided to participate in Blog Action Day for the first time by interviewing James Ward, an Indigenous health researcher with more than 15 years’ experience in sexual health and HIV. He is a descendent of the Pitjantjatjara and Nurrunga clans of central and South Australia.

The Office of theUnited Nations High Commissioner for human rights states that:

How would you say that this connection plays out for Indigenous people generally, and Aboriginal and Torres Strait Islander people in particular?

It’s an important point linking human rights to HIV vulnerability and it’s often off the agenda.


How that affects HIV is well described; things like intergenerational trauma, abuse of human rights, forced migration, lack of culturally appropriate education are all major risk factors for HIV transmission. Human rights are inextricably linked to HIV vulnerability and for Indigenous peoples globally it’s a huge problem that stems from failure to recognise the rights of Indigenous peoples to self-determination.

I think that we need to be more inclusive in our dialogue of intergenerational trauma and its relationship to HIV vulnerability. The effect of previous policies such as Stolen Generations and forced removal of children for many people still lingers and as such places populations at increased risk of HIV. The right to practise culture and be taught in Aboriginal language is a human rights issue that must be allowed to improve people's health literacy around HIV/AIDS. Traditional doctors and medicine is also not recognised as a profession in Australia, which is also a human rights issue.

Australia has a number of health related agencies represented in the United Nations Permanent Forum on Indigenous Issues and other UN fora, for example the National Aboriginal Community Controlled Health Organisation (NACCHO) and many of the Land Councils represent Aboriginal and Torres Strait Islander Australia at the UN. However I think that the agenda’s fairly packed and the time’s limited to present issues and HIV probably does get left off the agenda. There are so many other competing health priorities, things like education and human rights issues; clean water and sanitation are still needed in many remote communities.

I’m part of the International Indigenous Working Group on HIV/AIDS (IIWGHA). It’s made up of Indigenous people from 17 countries ranging from South and Latin America, North America, New Zealand, Fiji, Australia. We are trying to move forward with pushing HIV/AIDS as an agenda item in the UN Permanent Forum and other UN fora. Last year the IIWGHA was represented at the UN Permanent Forum for Indigenous Issues so I think we’re making headway but we've got a long way to go in terms of getting HIV up as an international agenda item.

Do Aboriginal and Torres Strait Islander people have the necessary level of autonomy in developing and implementing HIV programs for their communities?

Most Aboriginal and Torres Strait Islander people are well versed in understanding the risk factors within their communities and probably, once prompted, know what needs to happen in terms of addressing those risk factors; however, I’d say there isn't always autonomy in running those programs or responding to those risk factors. It’s very difficult in a diminishing economy to try and get some of those risk factors addressed. I think we do fairly well in most areas in Australia but we need to get better at securing funding at the right time and for the right issue.

The next edition of AFAO’s regular magazine, HIV Australia, takes a look at HIV and sexual health issues for Aboriginal and Torres Strait Islander people. You’re one of the guest editors – can you give us a sneak peak at some highlights?

It’s a really fantastic edition, it’s full of articles highlighting some of the programs, research, and current issues and how they relate to Aboriginal and Torres Strait Islander people and HIV. It’s a 64 page edition, it covers the whole gamut; there are articles there from urban communities and remote communities, it addresses the new technology available, it addresses STIs, it has the lived experience of an Aboriginal person managing multiple chronic conditions and HIV. It also addresses some of the more recent developments in HIV prevention, such as treatment as prevention and what that means for Aboriginal and Torres Strait Island communities in Australia. It will be launched at the HIV/AIDS Conference in Darwin on 21 October.  It’s got some great artwork on the front cover. It’s really a timely piece of work given that we’re in the lead up to the world AIDS conference to be held here in Australia next year.

What plans do Indigenous HIV activists and advocates have for the International AIDS conference in Melbourne next year?

We are holding an international preconference in Sydney 18 to 19 July, before the Melbourne conference. It really gives us an opportunity as Indigenous peoples globally to get together to talk about emerging issues, some of the persistent issues that exist in Indigenous communities and what our responses should be and how we can help each other in this global effort to get to zero both in terms of new HIV infections and in terms of discrimination and stigma related to HIV/AIDS. It will be two and a half days full of culture and presentations, and we’re still working out the themes.

You've been involved in this area of health for a long time – how did you get involved, and what keeps you going?

I first got involved in remote area STI work as an Aboriginal health worker /educator and recognised that there was quite a lot of work needed to be done in reducing HIV risk in remote communities in Central Australia. In the early days of the epidemic we did lots of work with remote Aboriginal communities, particularly making a series of videos for men and women in language about HIV – what it is, the implications for our communities, how it’s transmitted and how to reduce risk.

Progressively, as you do in your career, I moved to different areas and I ended up in in a research role. I've always had an interest in public health and STIs and BBVs.  And really, I love working in this area. HIV is an important human rights issue, it’s an important social issue, and it’s important to have Aboriginal people involved in this epidemic to make sure that we don’t follow the path of what’s occurred in Canada, where Aboriginal people are disproportionately represented in HIV diagnoses.

We've been very fortunate in Australia to have a stable epidemic, but I think if we don’t do something very different we’re on the verge of going down that path. It’s a very different epidemic in Australia – although our epidemic’s a little bit different to the non-Aboriginal population. Injecting drug use is a really important risk factor for us and it’s important that we try and get an increased effort to reduce risk related to that in Aboriginal communities across Australia. We are worried about HIV acquired through injecting drug use and then passing into the broader Indigenous population through sexual transmissions. 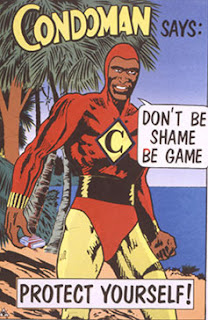 As you said, the numbers are pretty stable in Australia at the moment and fairly low so what would you attribute that to?

There’s a number of different factors but overall the response to HIV in Australia has been great and that’s had a flow on effect for marginalised populations like Aboriginal people. For example the introduction of needle and syringe exchanges in the early days of the epidemic in Australia has helped Aboriginal people in maintaining a very stable epidemic. Other factors that have contributed to stable rates of HIV are targeted health promotion messaging, a good health service delivery system, and a very well trained health workforce.


I think the other big things that have helped in Australia have been our own campaigns – Condoman has been fantastic for making sure people are aware about condom use – and things like the Grim Reaper. The Grim Reaper may be controversial for some, but really, you ask Aboriginal people who were around at that time, and they say that we need a new Grim Reaper ad, that it had a profound effect for a long period of time, about the impact that HIV could have on communities. I’m not advocating that we need a Grim Reaper ad, that stigmatises population groups, but we do need something that promotes discussion in the community. We need a very direct campaign that promotes a lot of discussion around HIV/AIDS and that’s what we hope to do as part of the international AIDS Conference next year, with communities across Australia.
Posted by AFAO at 11:15