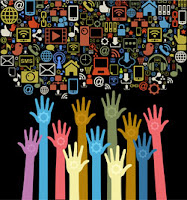 
(A quick aside before I get stuck into the online world: Any rumours of the death of offline health promotion are greatly exaggerated – as evidenced by a number of imaginative and effective offline strategies also showcased at the conference, from fortune cookies to a little red car to good old-fashioned workshops.)

Craig Lewis’ presentation on the Rip & Roll campaign described how a Facebook page set up by one of the campaign models when the posters were removed from public display after complaints, gained massive support that resulted not only in the posters being reinstated, but also in increased  discussions of condoms, HIV and STIs throughout social media.

Focus on the medium

So was there any point to having dedicated social media sessions? Well yes, because these sessions provided the opportunity to focus on the medium rather than the message. Learning to use the social web effectively is a steep learning curve – consider that most of the social platforms we use are considerably less than 10 years old and continually changing – and can be overwhelming.

So it definitely made sense to have an afternoon dedicated to exploring the possibilities of Facebook pages and advertising for engaging with gay men. Tony Tang from ACON ran this workshop, which – after the almost obligatory nod to the astounding global stats on social media use – rapidly became a conversation drawing upon the strengths of participants as well as on Tony’s considerable knowledge.

One aspect of the workshop I found particularly interesting was installing a custom app, in this case an HIV ‘risk calculator’ tool. Even though Tony was betrayed by the technology (as so often happens in social media sessions, ironically), I still got a good sense of how far Facebook can be extended if you have imagination and a good developer at your side.

While the main focus of this session was Facebook pages and advertising (which looks like it gives much better bang for buck than Google ads as you can very finely tune who sees your ads), Tony also discussed the crucial importance of a social media strategy, with examples of how ACON strategically managed the social components of their online campaigns This Is Oz and The Big Picture.

Strategy was also a key feature of Ilan Werbeloff’s ‘Step bystep guide’ to social media in the designated ‘Social Media’ session the following afternoon. Ilan’s key point was that using social media need not – should not – overwhelm your time or your budget. He described how he sets up a schedule for posting to social media for VAC’s Staying Negative campaign so that actually posting each day takes only a few minutes.

Ilan introduced a range of tools to expedite the use of Facebook and Twitter, such as bit.ly, which shortens URLS and tracks clicks so you can see exactly how many people clicked on a link in a specific tweet or post (and judge the success of the post), rather than that specificity being drowned in the flood of data in your web analytics reports.

Both Ilan and Tony also talked about Hootsuite, which enables you to schedule tweets and posts and if you wish, send the same post out via several platforms simultaneously. I felt that perhaps they could have been a little more critical of Hootsuite, having just come from the ConnectingUp conference where the take home message was definitely: use with caution – flood people with the same content on all platforms and they’ll get disenchanted with you very quickly. However in terms of scheduling I can see its value, especially if you are managing updates for a number of social media campaigns.

Yves Calmette’s session – The Power of Like – also focussed on implementing an effective social media strategy, in this case for ACON campaign The Big Picture, taking us behind the scenes into his daily, weekly and monthly planners. Yves also discussed measuring the success of the campaign and possible barriers to interaction – perhaps the most pertinent being that ‘Facebook users are typically more engaged by content that relates to them and with which they can personally identify’.

If you’re hungry for more tips on social media strategy, check out Lyndal Cairns’ article in the latest HIV Australia about Healthy Communities’ broad online strategy and the Rip & Roll campaign specifically. The latest edition focusses on the interaction of the web with HIV services, health promotion, HIV prevention and e-health.

Yves Calmette’s presentation is also in this edition in article form, as is Max Niggl’s account of the ChangingVoices project, which uses first-hand accounts of people's experiences of living with HIV as an educational tool, and James May's tour of the Down an' Dirty website for sexually adventurous men. Read more …

But back to the conference. While our sector has been keen to engage with social media, we haven’t explored the mobile web to the same extent. This is likely a reflection of lack of resources – a Facebook presence is a lot cheaper to create and maintain than building a mobile app – but perhaps it’s not such a bad thing. As Jason Asselin pointed out in Is there (a need for) an app for that? Web campaigns optimised for mobile can be just as effective – if not more so. He provided a cost benefit analysis of optimising for web vs. apps using TheDramaDownUnder and Wherever Sex Happens campaigns as case studies.

HIV organisations are not alone in struggling with apps; indeed, Heather Mansfield, author of Social Media for Social Good, recommends that not-for-profits (NFPs) bypass apps completely and head straight for mobile optimisation unless they have a really, really good idea for an app that will get traction with their constituents. That said, she recently offered some examples of killer apps by NFPs on her blog.


One topic I think merited more discussion at the conference was how to handle controversy, attacks and other upsets on social media platforms. But I guess it's not such a hot topic when you haven't had to deal with any major flare-ups. Those presenters who did mention it had found any problematic posts were addressed by other fans or friends (which is fairly standard for a thriving online community) and didn't develop into major issues. Lucky!

At the Connecting Up conference earlier in May I heard the story of the US-based Susan Komen Foundation, which attracted massive controversy and thousands of comments that were virtually impossible to manage, after defunding Planned Parenthood programs which had abortion services. While this was a worst case scenario, it did point to the need for a risk management plan so as not to be caught on the back foot.

The virtual pinboard Pinterest - which people like Heather Mansfield are saying is the new Big Thing in social media, also got no more than a throw-away line - I can't even remember by whom. Perhaps this is because so far the biggest uptake is said to be among women, not exactly the hottest market for HIV content in Australia. What do you think about Pinterest? Is it worth checking out its potential?

Nor did I hear anything about QR codes. Is anyone using them? Do you agree with this commentator that they are roller-skating horses? Or have you started exploring the posssibilities? If my local coffee shop has them instead of loyalty cards, I reckon there's potential.

My last 'missing in action' topic is blogging. My impression is that there are very few HIV organisations blogging in Australia - VAC is the only one that springs to mind, plus what I believe is a privately managed blog associated with Positive Life SA - so perhaps there's just not enough to talk about.

Technology consultant Bianca Wirth, who recently compiled a report on how Australian not-for-profits are using social media, writes in the latest HIV Australia that although blogs have the potential to bring in the highest search engine rankings, they also have the highest abandonment rate.

Maintaining a blog certainly takes a lot of commitment - especially in staff time. By the time this post is made live, it will have taken me the better part of a day to plan, write, edit, format, find the links & get approval. Compare that to Ilan's 15 minutes a day on Facebook and Twitter and you can see the investment has to be deemed worthwhile.

My own view is that it's important to be very clear about the purpose of blogging - well, that's a no-brainer really. The purpose of clever US blog Andrew's Anus (profiled in HIV Australia) is pretty clear - promotion of rectal health issues to gay men. In this case the purpose keeps the blog focussed and minimises the time investment - it comes and goes according to need - while keeping it relevant.

In AFAO's case, the key purpose of our blog is to share info and insights from the events we attend - hence we hope to have daily posts from the International AIDS Conference in Washington next week - and hopefully, over time, to generate conversations about issues raised at these events within the sector. I'm happy to share what AFAO is learning about blogging with you - perhaps at a future conference ;)


But enough of what was missing! Conference Organiser Ben Tart tells me the conference has evaluated very well. I’m not surprised. Uploading the presentations to Slideshare gave me a chance to catch up with those I’d missed. It was an excellent antidote to the frustration I often feel at conferences with concurrent streams, that it’s impossible to see everything you want to. I was impressed with the range, quality and creativity of the work you’re all doing out there. I think you will be too. Check out the Conference slides or listen to audio from the plenaries & tell us what you think. And if you have a social media campaign you'd like people to know about, email me so I can add it to AFAO's web listing of our members' online initiatives
Posted by Jill Sergeant at 14:08